Nature's Unpredictability and How to Compensate For It

When heading out of Michigan and back towards home, I wanted to make a stop at a waterfall south of Green Bay, WI. Anyone that knows Wisconsin is probably questioning...A waterfall south of Green Bay? Ok, but and impressive one? Yes there is one. It is called Fonferek Falls. The morning I headed out was dreary with a forecast for rain. It was a light rain, but still something to deal with when photographing. Whenever I go on photography trips I pack for the worst. In order to protect my gear I have a cover that fits over my lens and lets me see the back of my camera, plus two sleeves to aid in waterproof operation. I usually have a umbrella in my car, which I used during lens changes and my gear bag has a raincover as well. My gear by itself can handle some moisture, but then again why chance it when you have the protective gear. Note: I always dry my equipment out after a shoot in the elements no matter how much it is protected.

Speaking of chance, I really had no idea how large this waterfall would be. The research I did returned sparse results so I took a chance. Glad I did. With the spring thaw that went through the area recently made the falls quite active. Still fighting with the rain, which the intensity of was growing as I photographed I came away with some solid images.

The falls from afar 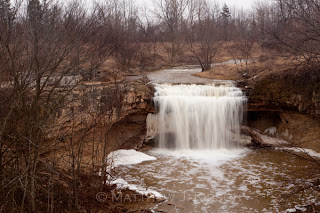 Standing at the edge of falls looking down...Not for the timid!!! 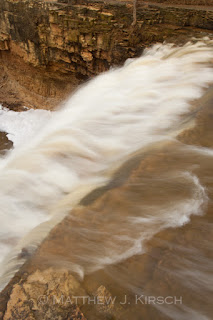 So as you can tell from the above story, you have to be ready for what nature throws at you and never underestimate what it will provide in terms of surprise and beauty regardless of the weather.

Posted by Matthew J. Kirsch at 6:00 AM No comments:

I was on my way back from my Upper Michigan trip and stayed at a stopover point in Menominee, Michigan. My motel happened to be overlooking Green Bay. The actual bay of Green Bay not the city. The lighting was very flat that day and pretty much continued that way into the night. The next days forecast was overcast with occasional rain. Not ideal shooting conditions but as a photographer you learn to work with what is given to you. The next day I was up early as I usually am at 5:30 AM. I needed to retrieve something from my car. As I was heading for my car, I looked over at the bay and noticed what was the making of a beautiful sunrise. Remember the forecast was predicting overcast with occasional rain so I was not expecting to see any sun. Once I noticed the sunrise I immediately ran back to my motel room and retrieved my equipment. Knowing that I only had a matter of minutes, time was of the essence. This is where knowing your equipment and being able to set it up quickly counts.

This first thing I noticed was the abundance of clouds. If the clouds are in the right area, it is always a recipe for a more compelling sunrise. The other thing I noticed was small areas of ponding from snow melt occurring in the area. In the end the following was my unexpected sunrise. 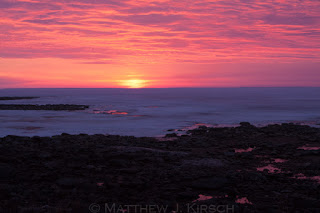 Posted by Matthew J. Kirsch at 5:30 AM No comments:

In Part V of this ongoing post, I will show the highlight of my trip and what happened to be the ultimate goal of it. Photographing the Eben Ice Caves. If you remember in Part II I mentioned I was stranded in Marquette, MI due to a late season snowstorm. The roads up there alone are not a picnic, but they are even worse after a snowstorm. Think of a washboard road you have been on and multiply it by five or ten in terms of severity and then add slushy mud. Remember I only have a passenger car. So I was lucky to even arrive after the hairy ride out there. I had mud on the roof of my car because it was so bumpy. Once I arrived at the "parking area" (basically where a road curves) I noticed I was the only one who didn't have a 4x4. When researching the area, it suggested bringing snowshoes. They weren't kidding. The trail out to the Eben Ice Caves is about a mile and a half with steep slippery hills. Mind you I was carrying thirty pounds of photo gear on my back. But as you shall see, it was well worth it.

So at this point you might ask: What are the Eben Ice Caves? Basically it is wide, slow moving waterfall that freezes into place in the winter. What makes it unique is the vast array of colors presented in the ice due to the various minerals found in the water. Definitely not something you would think you would see in the Midwest, or for that matter in the United States.

As you will notice in the picture below, it definitely depicts a frozen waterfall. But the magic is not revealed until one goes inside the ice cave and see what the backlighting does to the ice. 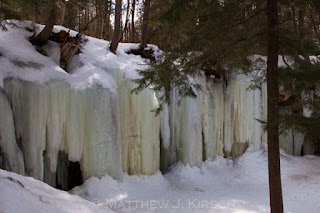 This is where the magic begins: 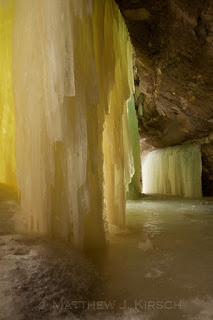 Ice wall up close and personal. It doesn't get any better than this! 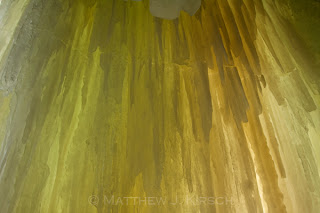 A waterfall within a waterfall 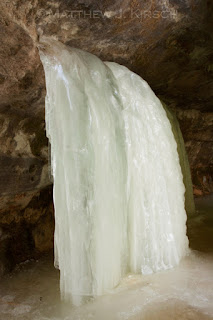 From the perspective in being inside the cave looking out 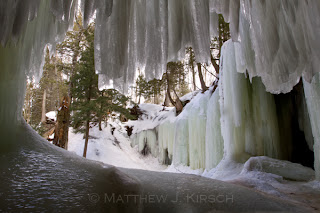 That is the glory of the Ice Caves. I felt I was meant to arrive there. Even with the treacherous weather I encountered in Marquette the day before I new once I arrived I was supposed to be there. When I arrived at the Caves I was all alone. All the owners (all locals) of the vehicles I encountered at the "parking area" were on the way back as I was heading out there or just leaving as I arrived. On my way back from photographing, I went through the same cedar forest that I in through. I can't remember the last time I observed the silence like I did at the moment. Nothing but a light breeze was all I heard. A silence of winter. A silence of being all by yourself surrounded by nature. If you interested in seeing larger versions of the images in these posts head over to my website: Click on this link to take you there. All images are for sale or stock usage.

Posted by Matthew J. Kirsch at 5:30 AM No comments:

As I eluded to in my last post my next stop was Wagner Falls. The snow base at this location was three feet. Below you can see the amount of snow piled up on the plank way to get out to the falls. 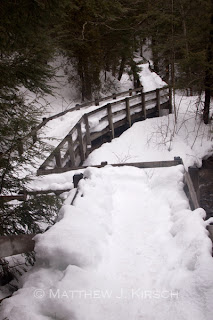 The IPhone video below shows how much I get into my photography to get a great shot. At the end of the plank walk there is place to stand and observe/photograph the falls. I decided I wanted to shoot from the perspective of standing in the falls. I proceeded to climb down from the observation area and walk into the falls. As you will see in the video I am in the heart of my subject.

Getting to the heart of my subject results in perspectives like the below images portray: 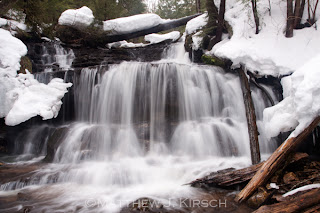 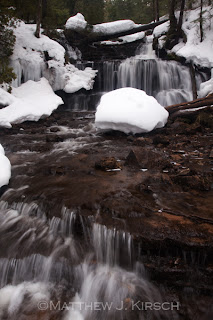 Next up in Part V, Ice Caves formed from a slow freezing and thawing cycle of a waterfall. If you enjoy these posts, could you do me a favor and share them with someone else who might enjoy them? You can share it directly by clicking on the buttons located below the post. And remember for a more comprehensive look at my images, please visit www.matthewjkirsch.com
Posted by Matthew J. Kirsch at 6:00 AM No comments: